Insights on The U.S. Infrastructure Bill – Opportunities on the Horizon 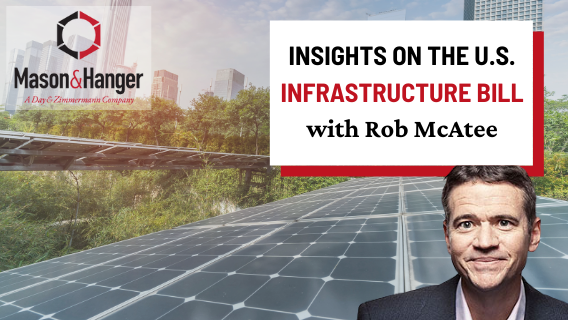 As a part of our Insights on the U.S. Infrastructure Bill video series, Mason & Hanger, a Day & Zimmermann Company, is covering the major allocations and developing updates on this historic bill that will impact U.S. Infrastructure and the modern era as we know it – leaning on support from the architecture and engineering community. There is still a lot of debate and negotiation ahead, but in Washington there’s a feeling of general optimism that this bi-partisan bill will become law. As a provider of these services to the federal government, Mason & Hanger is looking forward to helping our clients and the country rebuild and upgrade.

Scroll down to watch the new Insights on the U.S. Infrastructure Bill video or click here.

Simply put, a microgrid is just a group of buildings that can be isolated from the broader electrical grid. This implies that the microgrid has its own source of electrical generation which can be renewable energy or plain-old diesel generators. Historically, microgrids have been expensive to build and operate, primarily due to the cost of the on-site generation and associated paralleling controls. Today, as controls, renewable energy, and battery energy storage have become much cheaper, the primary impediments to more microgrid deployment are regulatory. Of course, first cost is still a barrier, so given the benefits microgrids provide in both resiliency and the ability to integrate renewable energy, it makes sense that money for advancing microgrids would be included in this bill.

There are three main areas where microgrids are directly mentioned in this bill:

1. Preventing Outages and Enhancing the Resilience of the Electric Grid

Grants are available to states, tribes, and other “eligible entities” for a variety of measures. This includes hardening of power infrastructure, undergrounding of utility transmission and distribution, fire-proofing of transmission lines, and increased monitoring. Microgrids and battery storage are specifically called out means for enhancing system adaptive capacity during disruptive events. This bill includes a special mention of combined heat and power, which is a great way to reduce energy costs and emissions.

Microgrids have been operating in some parts of the U.S. for many decades without being connected to the broader electrical grid. (Especially Alaska, Hawaii, and tribal lands.) Financial assistance is available to extend transmission and distribution lines to these areas.

3. Improved Distribution and Monitoring in Support of Electric Vehicles

There is $5B set to be allocated to establish and fund a National Electric Vehicle Formula Program. This will support the continued roll-out of charging infrastructure for electric cars and trucks providing much-needed upgrades to local distribution networks and better controls to monitor and control the flow of power. In many locations, there will be heavy overlap with microgrids which, as noted, already have the power monitoring capabilities.

Maybe the coolest part of this is that there will be support of vehicle-to-grid (V2G) which would allow for the two-way flow of electricity from cars to the grid. Hundreds of thousands of mobile power units could help stabilize grid fluctuations without needing to draw much total energy from any single vehicle.

Hear from Rob McAtee PE, Director of Energy & Sustainability Services at Mason & Hanger, A Day & Zimmermann Company, on the opportunities this bill will provide for agencies within the federal government working to reduce overall energy intensity and associated emissions.