Reality Check, Is BIM Living Up to Its Promises?

What if I told you that over 90% of all Architectural, Engineering, Construction, and Operations (AECO) firms are engaged in BIM? Well, according to McGraw-Hill Construction (MHC), the construction data research arm of McGraw-Hill Publishing, that is the projected 2014 statistic. 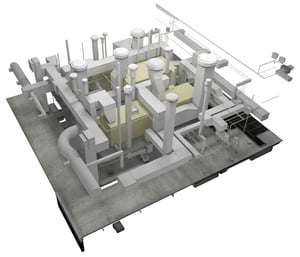 The term Building Information Modeling (BIM) first appeared in the early 1990's. Architects began to visualize their buildings in 3D, and used that visualization model to generate 2D views. This was a shift in paradigm from conventional 2D architectural drawings used to construct buildings.

Of all the uses identified for BIM, the #1 reason cited by engaged BIM users was "reduced document errors and omissions." Using a BIM model for authoring design drawings is proven to reduce errors due to parametric linking of data to the model. A change in one view is instantly propagated to all other views.

For all the buzz words associated with BIM, it is not immediately apparent what the advantages are by using BIM for building design and construction. What value do you place on BIM?

Only companies that are fully engaged in BIM will reap the benefits. When you take the soft approach to BIM, you often make compromises in productivity. Sometimes at a cost.

In addition, the effort curve has shifted.  Illustrated by the MacLeamy Curve, the effort in design development has increased significantly for BIM projects, requiring a shift in billing schedules. The documentation phase requires less effort due to the centralized source of data in the virtual model.

BIM is often used for multi-discipline coordination of building systems. Interoperability and model sharing are essential to this endeavor. However, parties to the contract may be at different stages of BIM implementation and may not be aware of the other's limitations or variation of platform.

Another distinction in ability to coordinate the BIM models is the design vs. construction model paradigm. There are varying Levels of Development (LOD) required to achieve a well coordinated design.

While architects and engineers are aware of the need to coordinate in 3D, often they do not see the benefit of modeling a design to the level often required by contractors.

For example, an HVAC engineer would not typically take the time to model ductwork flanges and hangers. This is often considered "means and methods," which is typically under the responsibility of the contractor.

Unfortunately, owners often do not understand the need to model the building twice, once by the A/E and second by the contractor. The cost to the owner can be significant, and they will not see an immediate ROI. For this reason, owners have been slower to engage in BIM.

Unfortunately, a number of factors can negatively affect the ability of an owner to take advantage of these perceived benefits.

Too many owners are not aware of the risk/reward scenarios afforded with BIM project delivery. Owners need to rethink their procurement strategies. A lack of knowledge and understanding of new technologies may be keeping owners from realizing the true benefits of BIM.

BIM offers many advantages to traditional design and documentation methods. However, it is the information sharing relationships of BIM participants that will ultimately determine the success of a BIM project.

Owners must be willing to engage all participants early in the process and avoid the failures of BIM early adopters. Not until then will owners be able to take full advantage of the promises of BIM.