It seems every journal I open gives at least a mention to microgrids. Whether in the context of renewable energy, resiliency, or infrastructure, microgrids are hailed as being the solution to our energy concerns. You see promises to implement them at every base, campus, and neighborhood in the country. However, it’s not always clear what a microgrid is, or if they make sense financially.

What is a Microgrid?
At its most boring level, a microgrid is simply a generating source (usually a lumbering diesel generator) and a load (one or more buildings) you can operate independently from a larger electrical grid. Using this definition, microgrids arrived a long time ago, and the U.S. alone already has tens of thousands of them. Institutional facilities have a generator rusting away behind a dumpster or a loading dock (and hopefully, it will fire-up when the power goes out). Remote outposts like islands and mining communities have relied on this definition of microgrids for decades since there’s never been another power source to lose. 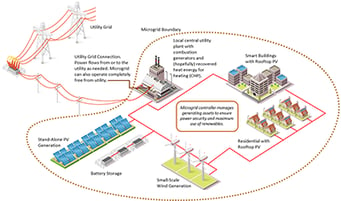 If that’s all there was to microgrids, I doubt you would see so much buzz about them. Fortunately, it’s not.  Microgrids do a lot more. Most definitions of modern microgrids include the following characteristics:

Black Start: The ability to start at least one generator when no utility power is available.

Items one and two make the biggest difference. Let’s focus on those. Operation in parallel with the electrical grid is a bit tricky with rotating generators because the frequency and voltage must be carefully adjusted to match the utility. In addition, the associated protection devices need to handle current in both directions. Improved control systems have made this easier, but close coordination and negotiation with the larger utility is required.

Once a generating source can be operated in parallel with the grid and production can be staged to match the load (item two in the above list) a lot of new opportunities become available. The amount of power a campus or facility draws from the utility grid can be greatly reduced.  Since demand charges are a healthy percentage of utility costs for much of the country, huge cost savings can be realized. Even in areas with modest demand charges, overall energy costs can be reduced when combined heat and power (CHP or cogeneration) is incorporated.

Depending on the local rates and the mix of generating sources, a microgrid can be financially attractive on energy savings alone. But it’s also important to consider the benefits associated with improved reliability, increased use of renewable energy, and reduced emissions. These benefits are more difficult to quantify, but they are very real and can make a project viable when considering an overall return on investment.

What About Renewable Energy?
Most of the current discussion and excitement surrounding microgrids revolves around the integration of renewable energy, typically solar photovoltaic (PV) or wind. For both generating sources, the DC output voltage is adjusted and an AC waveform is artificially created by a sophisticated device called an inverter. Inverters are also used to convert the DC output of battery storage devices to AC. Fortunately for us, costs for these inverters have been falling nearly as fast as the price of the PV modules and wind turbines they serve. Battery storage is also beginning to see the same downward price trend meaning we have a lot more options than diesel generators or combustion turbines for supplying our microgrids.

By combining renewable energy sources with storage, it’s easily achievable today to create microgrids that supply all (or nearly all) of a facility’s annual power needs with renewable energy. The key is in the controls. Something needs to get those inverters talking to one another and operating in tandem with storage devices. This is the role of the microgrid controller.

Distributed Generation, Control, and Cyber-security
With the growth of renewable energy, most of the new facilities we are designing have the hardware they need for an advanced microgrid. As previously mentioned, they only lack the high-level controls necessary to optimize the switching of the generation capabilities and ensure stable, efficient operation. Proper integration is the key to success, and this is where the majority of the engineering and creativity comes in.

To get the biggest benefit, systems should be able to communicate with and respond to the larger, utility-run electrical grid. This is the whole idea behind distributed generation and a big part of the smart grid concept. We will still have a nationwide power grid, but instead of just a few hundred large power plants, we’ll have thousands of smaller generation sources made up of renewable energy, combustion generators (if necessary), and energy storage to manage rapid fluctuations and nighttime demand.

Naturally, any system integrating with our power grid needs be secure from outside intrusion. In fact, cyber-security is one of the key drivers in the case for microgrids. If just a few key components in our grid are compromised, it could result in widespread and lengthy outages. It’s beyond the scope of this article, but the joint DOD/DOE SPIDERS (Smart Power Infrastructure Demonstration for Energy Reliability and Security) program was launched in large part to address the cyber-security threats related to our grid. The system’s new microgrid controllers and sub-controllers are based on a more secure and easier to patch framework and operating system than the legacy systems currently running our nation’s distribution grid.

The Future of Microgrids
A number of trends are converging to favor the continued roll-out of microgrids at a variety of scales. From single buildings to campuses, to entire regions, these trends include:

- The cost of renewable energy is plummeting, especially wind and solar.

- Software and control systems are improving.

- There is growing awareness of the importance of resiliency, especially in the face of climate change and cyber-security threats.

Widespread implementation may still be a few years away, but we continue to see great interest from our clients, particularly when it comes to secure power. The next group of early adopters are those interested in achieving net zero energy. Utilities will begin installing regional microgrids or partner with large users to provide effective load management. All of this will transform our electrical grid for the better, improving reliability, resiliency, and our environment. There will be challenges to overcome, but the tools are here and the time is right.

Mitigating the COVID-19 Spread: As We Plan for an Eventual Reopen, What Should be Considered? Read Post
Mason & Hanger: 200 Years of Innovation as an All-American Company Read Post