Insights on Green Heat: Renewable Fuels: When You Really, Really Need to Burn Something

In the previous blog of this series, we uncovered the troubling truth about steam systems’ inherent inefficiencies and high emissions rate compared to other methods of heat. To be sure, its use should be scaled WAY back, and we don’t need it in most HVAC uses. Still, there will continue to be process and industrial applications for which high temperatures are needed. Steam and furnaces are typically used in these cases, however they require heating in the form of electricity or fuel combustion to reach the necessary temps. Since this can get expensive to do on a large scale using electricity alone, we are left with fuels for the near future.

It’s important to note that fuels aren’t necessarily bad, as long as they’re not fossil fuels emitting carbon that was sequestered millions of years ago. It’s possible to produce combustible gas and liquid fuels in a variety of ways that don’t rely on pre-historic carbon. In fact, these renewable fuels or “green fuels” are in high demand as the number of manufacturers pledging to reduce emissions continues to rise.

Here is a quick overview of some of the renewable fuel sources available today. There are certainly others, but these seem to be getting the most attention lately.

Methane (CH4), the main component in natural gas, is also a common by-product of decomposition and digestion. As long as we burn methane that was created relatively recently, rather than the millions-of-years old variety, the resulting CO2 emissions impact is relatively neutral. Methane is emitted in great quantities from landfills, wastewater treatment plants, and waste lagoons at factory farms. Anaerobic digesters can be used to create and capture methane from wastewater and agricultural waste streams. These systems are scalable over a wide range, from small farms to huge cities.

Importantly, capturing methane is a double win since it’s even worse than CO2 as a greenhouse gas. (This is why you often see methane flared-off in industrial applications. It’s much better to capture and use this energy than to make eternal flames.)

Given the demand for renewable methane, also called renewable natural gas (RNG), and the environmental harm releasing methane into the atmosphere can do, pretty much ALL large-scale wastewater treatment plants and wastewater lagoons should include capture and recovery. There are numerous existing and emerging incentives available to make this happen. 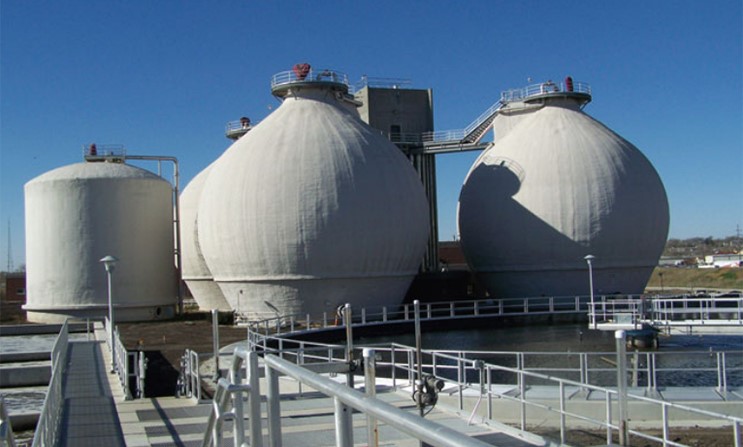 Anaerobic Digester for Production and Capture of Methane and Wastewater Treatment Plant in Nebraska. (Source: City of Lincoln, NE)

Hydrogen (H2) might be the perfect fuel. It has no extra elements, like carbon, to form troublesome compounds after it reacts. Typically the only products from the reaction of hydrogen and oxygen are energy (good) and water (also good).

At present, most hydrogen for industrial use is produced from fossil fuels, primarily natural gas. Increasingly though, hydrogen is being generated through hydrolysis of water using renewable electricity from solar and wind. The overall efficiency of this process is increasing, so conversion of electricity to hydrogen may be considered a type of energy storage, producing usable fuels when the grid can’t take more electricity.

Hydrogen can be difficult to store and transport, but standards and equipment for doing it are getting better.

Liquid Synthetic Fuels, based on combinations of hydrogen and existing CO2, are becoming cost effective and are being scaled up using a variety of waste streams for input. The aviation industry has been leading this charge, but these fuels may also be used in industrial processes and other forms of transportation.

Biomass, in the form of wood scraps, grasses, or other organic waste products, can be burned in special boilers for heat and steam. There are drawbacks to this approach, however, as there can be significant particulate emissions in the burning of solid fuels. Since consistency of feedstock is important for most applications, there have been instances where land has been cleared just to keep the feedstock available, which can be counterproductive when we’re trying to keep carbon sequestered. There are still some industrial applications where biomass and biofuels might make sense. Although, but environmental controls must be applied and biomass projects are no longer drawing as much interest as other green fuels.

Business Case
As much as we need to move toward electrification of our buildings and transportation, old-fashioned combustion will remain with us for a while. Renewable fuels should continue to be incentivized and promoted so they can be scaled up and become less expensive. In many areas, the demand for these renewable fuels already exceeds supply so there is an increasingly strong business case for the production of green fuels. To avoid leaving a great deal of money on the table, municipalities and agribusiness should include methane capture in their project financial planning to deal with solid waste.