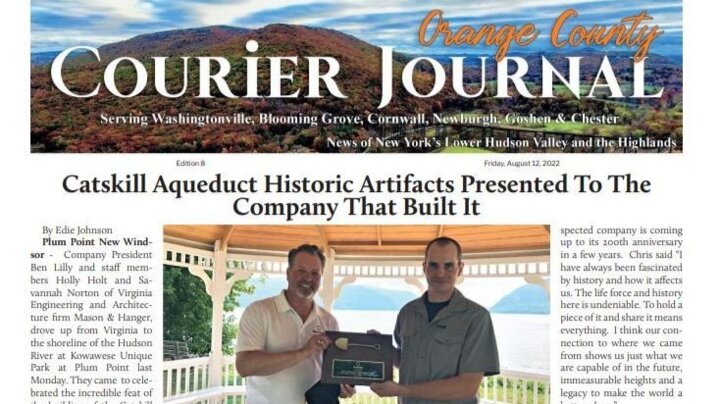 Catskill Aqueduct Historic Artifacts Presented To The Company That Built It

Company President Ben Lilly and staff member Holly Holt of Engineering and Architecture firm Mason & Hanger, drove up from Virginia to the shoreline of the Hudson River at Kowawese Unique Park at Plum Point last Monday. They came to celebrate the incredible feat of the building of the Catskill Aqueduct, and two young men, Chris Schaut and Alan Morasky who went metal detecting and found historic artifacts [112-years old] in the area of the Moodna Siphon Shaft [One of two deep pressure tunnels Mason & Hanger built as part of the Catskill Aqueduct System, New York, through nine miles of solid rock, 1910].

The shaft brought air and supplies to the workers and mules below who were constructing the tunnel that was to bring water all the way from Ashokan and Schoharie reservoirs and ultimately house workers and mules while digging through bedrock over 600 feet beneath the Hudson River, and on to New York City, during over a span of about 11 years.

Today the value of the Catskill Aqueduct cannot be overstated, as area communities struggle with an unprecedented heat wave and local emergency water restrictions and Governor-issued drought watch warnings in 21 New York Counties.

Plum Point has a spectacular view of Storm King Mt. and Breakneck Ridge, and there Ben Lilly was given a very special gift commemorating the aqueduct’s colossal accomplishment.

Local metal detector Chris Schaut [pictured below] and his friend Alan Morasky had been out detecting in the area and found items left behind by workers long ago. They included eating utensils, a helmet, coins, suspender clasps and copper work ID tags stamped with Mason & Hanger Co. 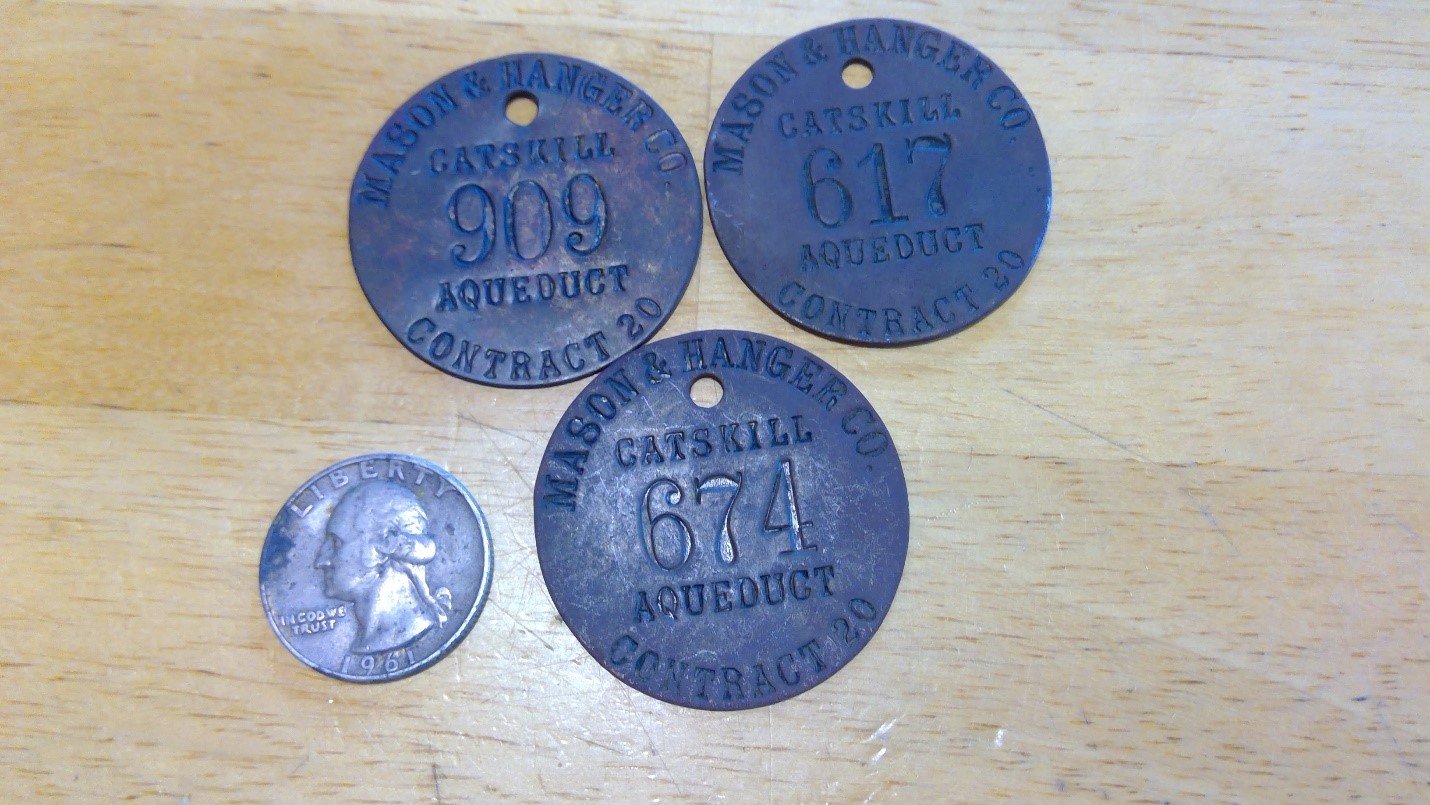 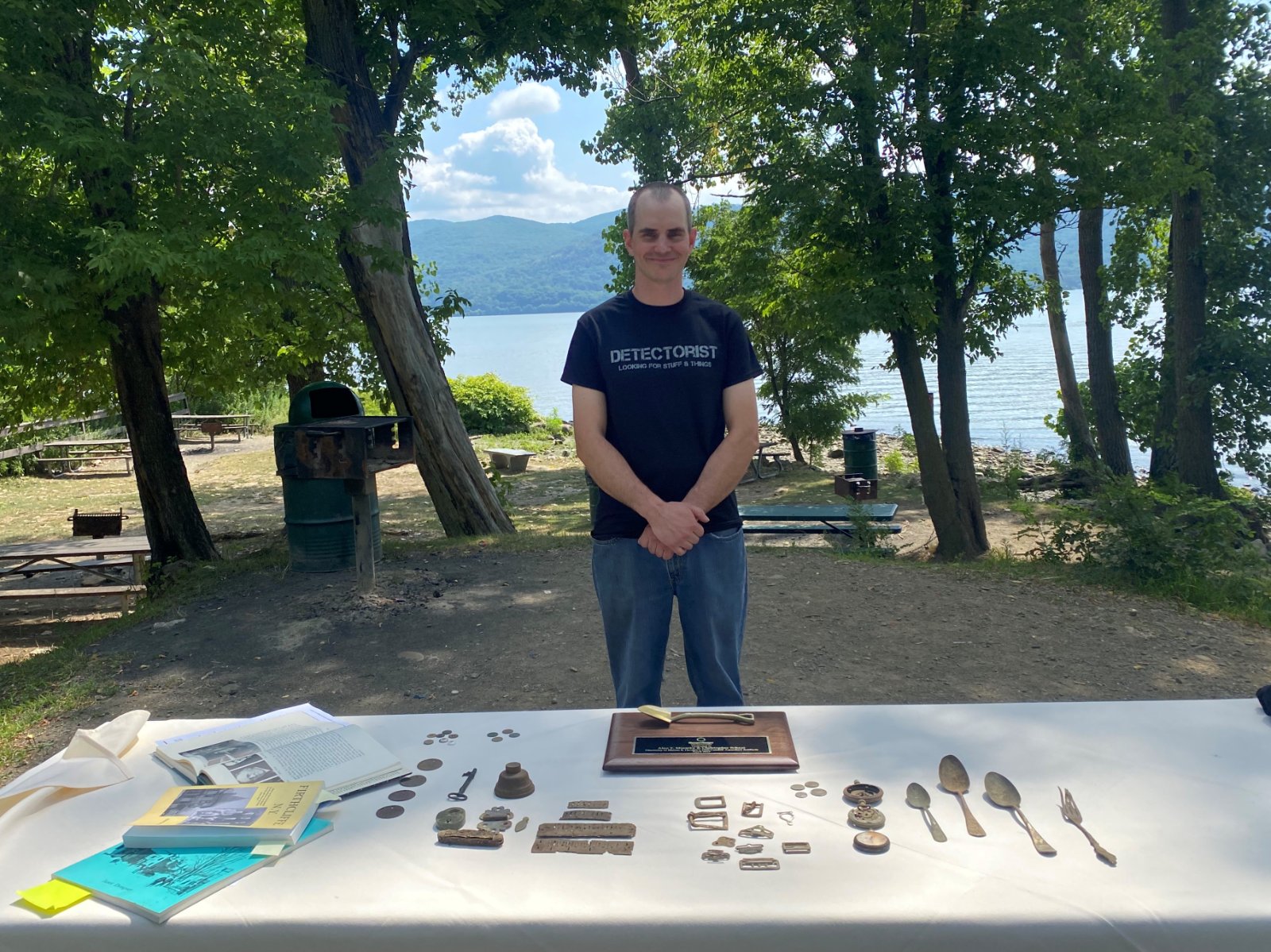 The find happened in 2017, and the friends kept the items until this past Spring when Alan Morasky passed away and Chris decided that as a tribute to his friend the items should go to the company that constructed what many at the time considered the greatest engineering feat of all time. The timing was also good because the highly respected company is coming up to its 200th anniversary in a few years. Chris said “I have always been fascinated by history and how it affects us. The life force and history here is undeniable. To hold a piece of it and share it means everything. I think our connection to where we came from shows us just what we are capable of in the future, immeasurable heights and a legacy to make the world a better place.” 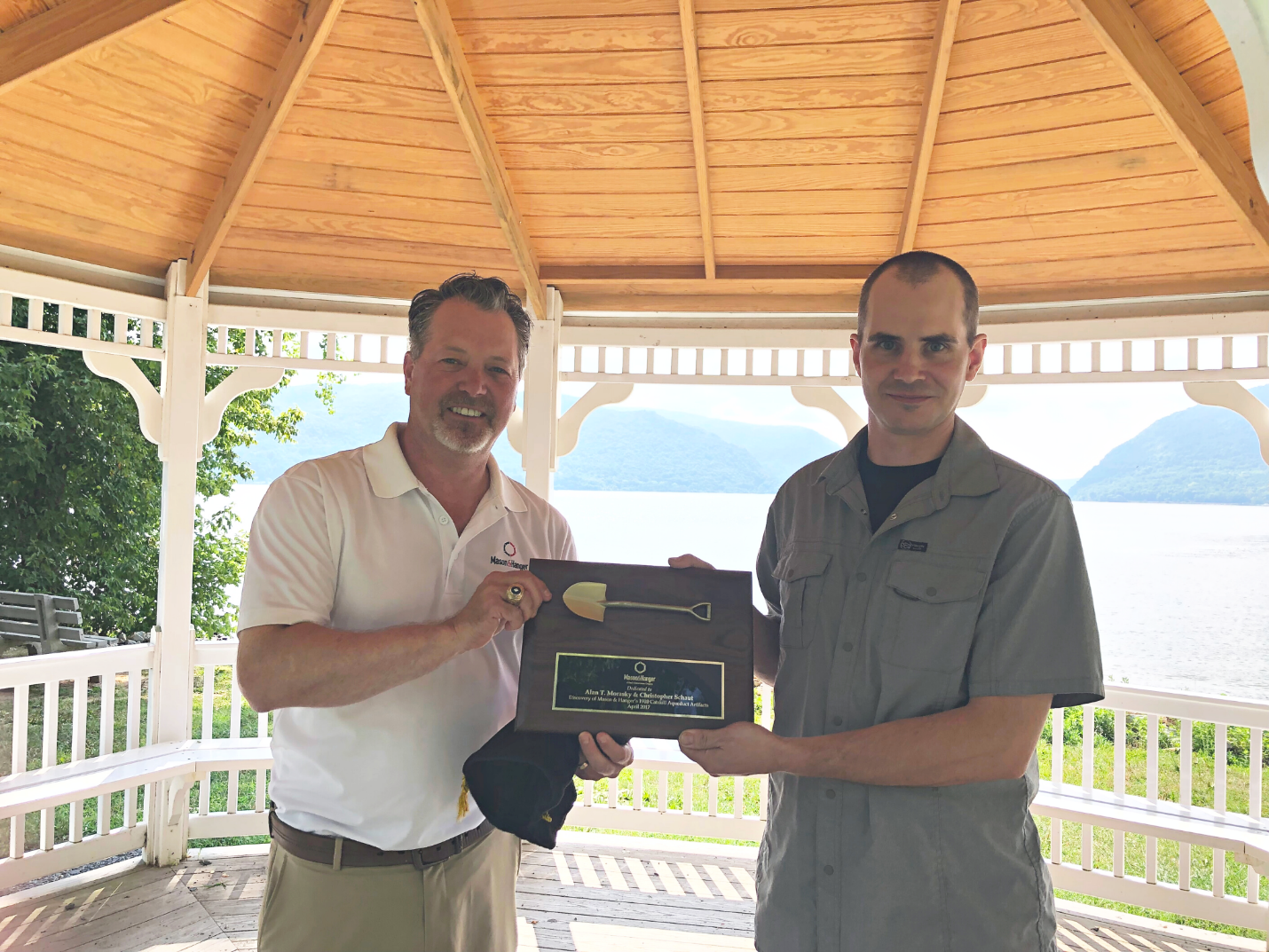 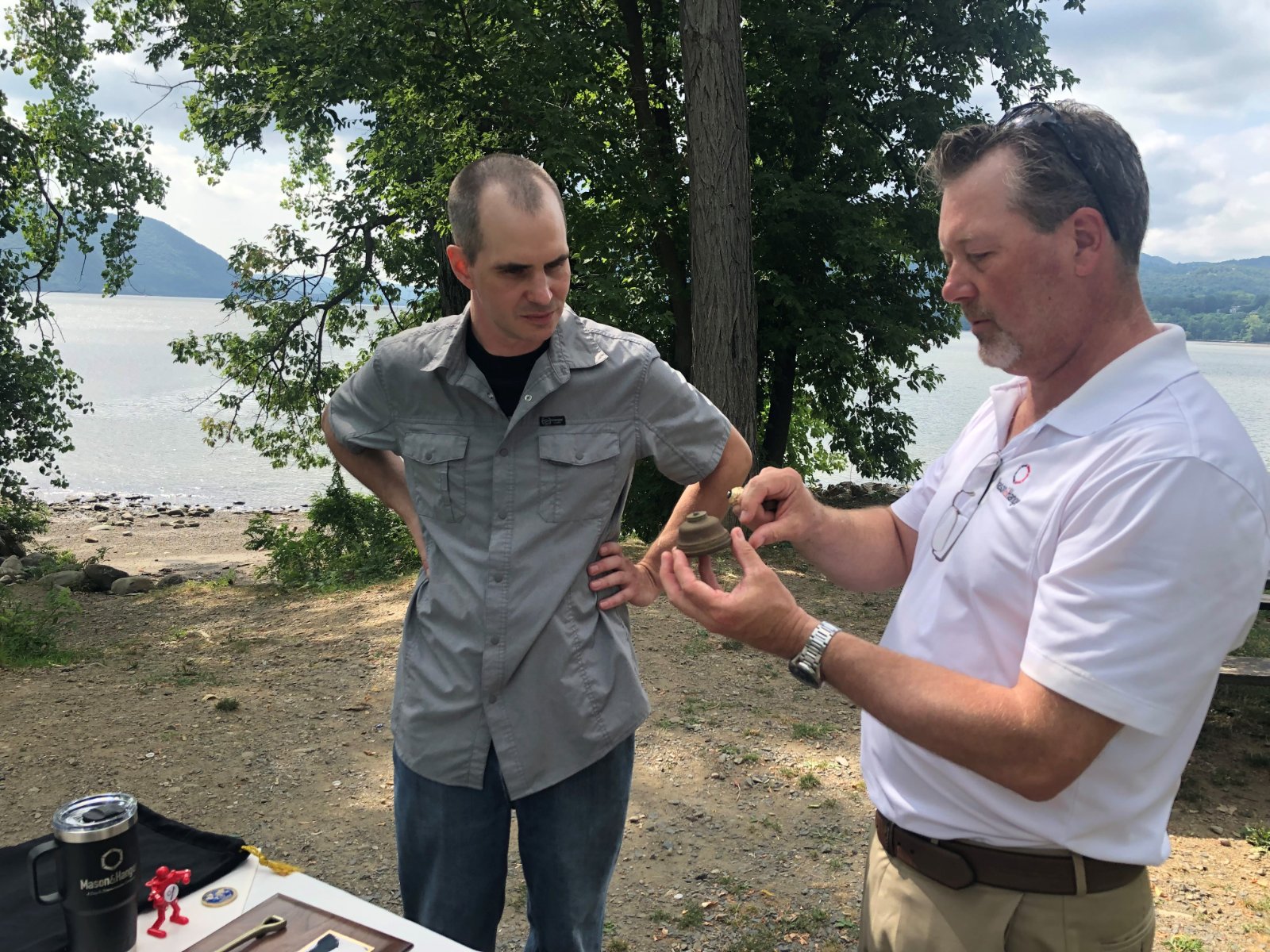 Not only was this an unprecedented architectural and engineering feat, but by bringing water all the way from upstate reservoirs it allowed New York City and its social life to grow and prosper. Today the Catskill Aqueduct still provides approximately 40% of New York City water, and an additional branch is being created to provide water to a community in Southern Orange County. 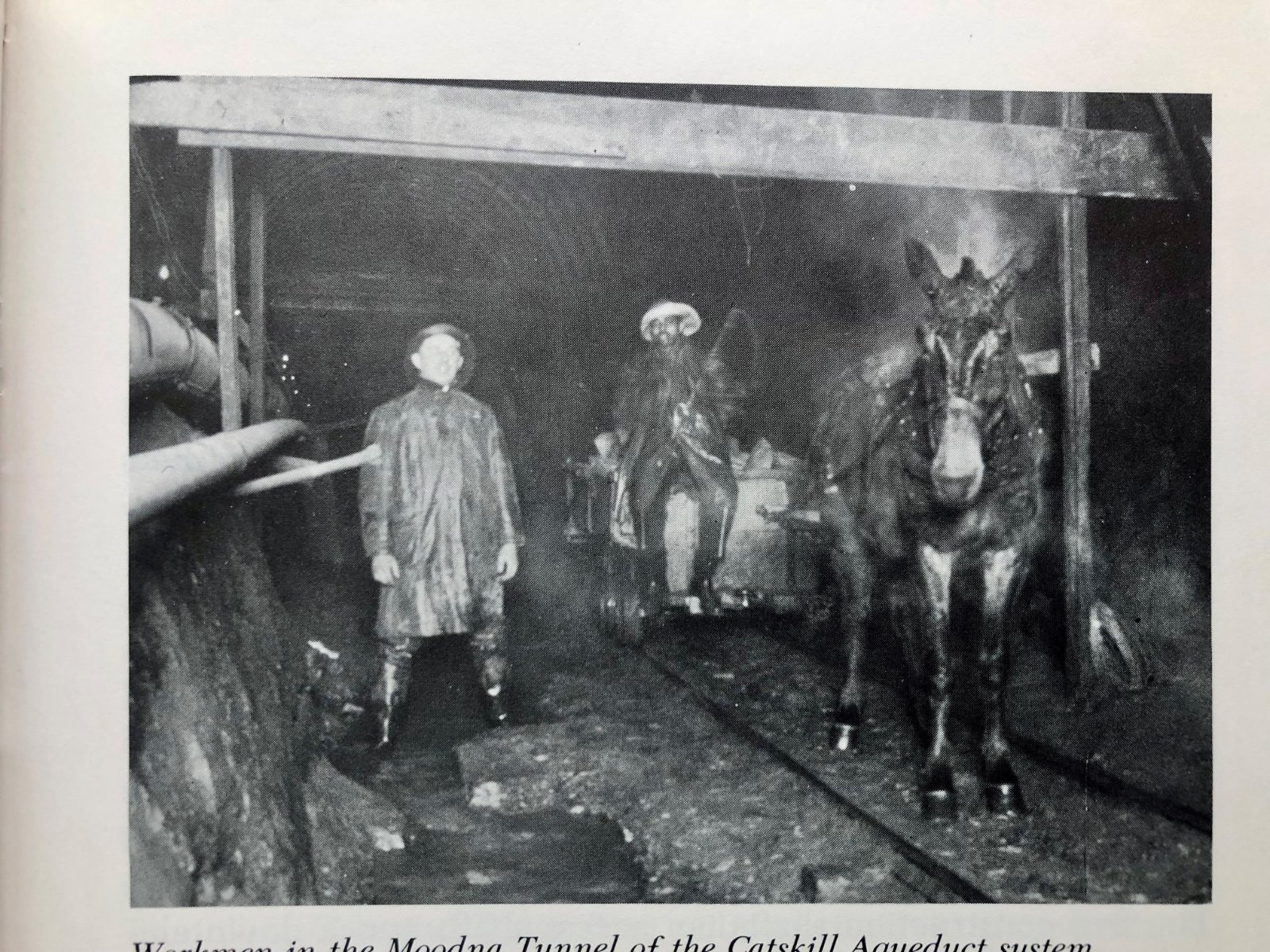 Mason & Hanger built other remarkable engineering structures in New York as well, including the Lincoln Tunnel, Fulton Street and Rutgers Street Tunnels and almost $50 million in subway contracts. Much of their work these days is in U.S. Government contracts. The Catskill Aqueduct was no mean engineering feat. In order to be safe, the “siphona” tunnel pieces had to be set down 400 ft. into bedrock beneath the Hudson River, and with an additional almost 200 more feet of bedrock above it to withstand the enormous amount of water pressure without risk of collapse. The majority of aqueduct water from its source to the Hudson River is gravity fed... an engineering feat in and of itself. New Yorkers bragged “Hey, this is the biggest project ever. It’s bigger than the Panama Canal.” 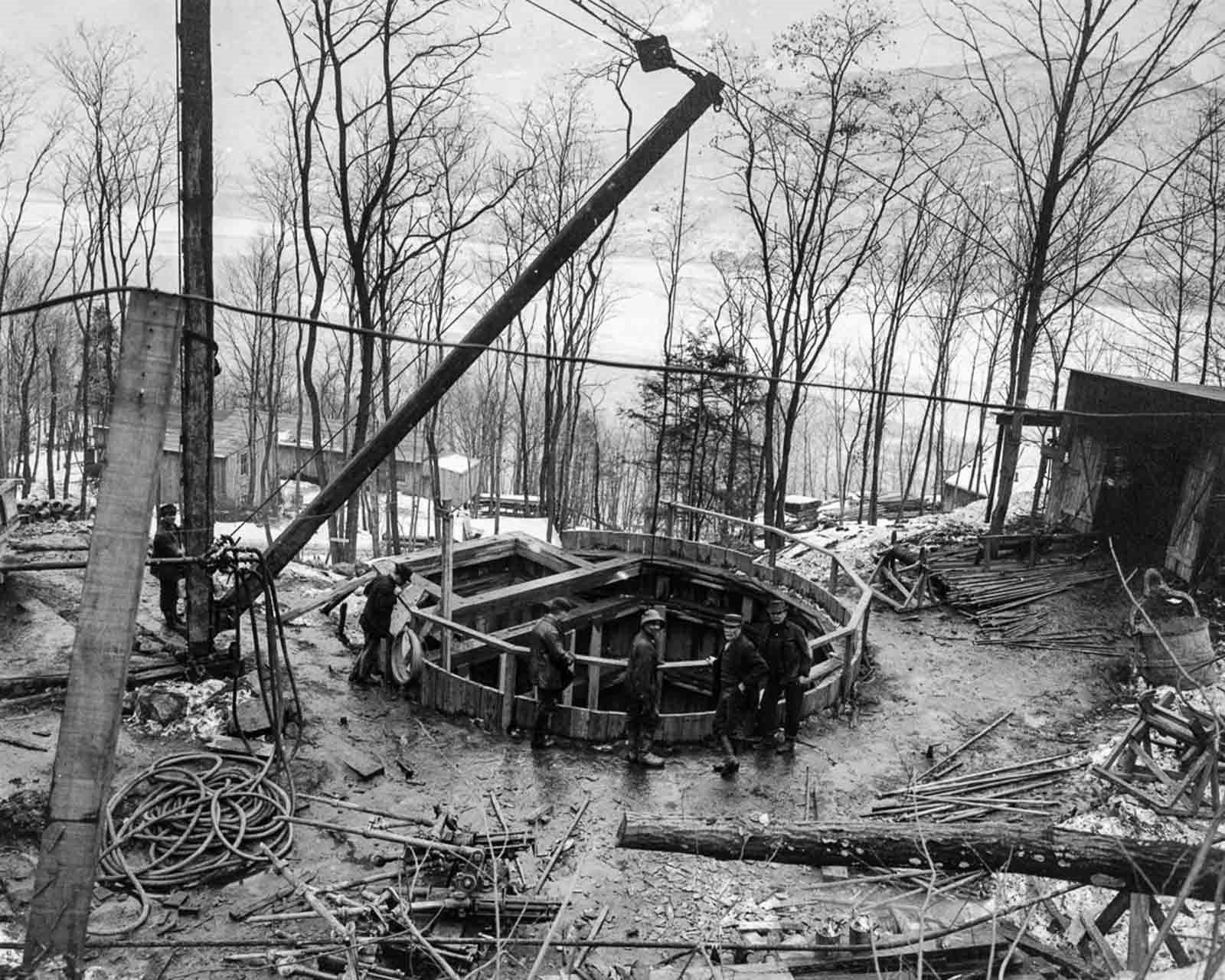 The top of Shaft 7 of the Moodna pressure tunnel, with the Hudson River in the background. 1910 Courtesy of New York Public Library

New York City celebrated for 3 days when the aqueduct was completed in 1917, with 15,000 children and 1,000 college students in Central Park cheering “The Grand Gift of Water”. It has a carrying capacity of approximately 500 Million gallons of water per day.

Aqueduct Site 19, in 1907, the Tunnel's crossing under the Hudson, where last week's meeting between Chris and Mason & Hanger took place. Drills bore into the bed of the Hudson River at Storm King Mountain, where the Catskill Aqueduct crosses from the west side of the river to the east, 1,100 feet underground.

Historic photos are courtesy of the New York City Library. Current photos at site by Mason and Hanger staff.