CELEBRATING 75 YEARS WITH THE DEPARTMENT OF ENERGY 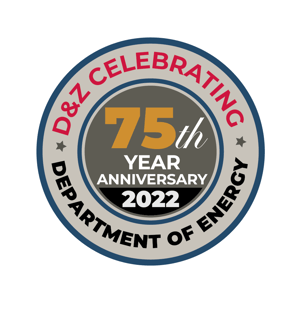 As a larger team of Day & Zimmermann companies, we have proudly served the Department of Energy (DOE) and DOE Mission for 75 years.

Since 1947, we have provided an array of architectural, engineering, and security services—from the design of nuclear weapon manufacturing plants in the 1950's, to the ongoing protection of present-day facilities.

With our strong history supporting the Department of Energy (DOE), Day & Zimmermann's companies, including Mason & Hanger and SOC together have provided mission-critical services to protect national security assets that include Category I Special Nuclear Material in research, development, and manufacturing environments.

A few noteworthy moments in the history of DOE include:

First AEC Production Plant - We began our 75 years of service to the Department of Energy by operating the Atomic Energy Commission’s (AEC) Burlington Plant in Iowa, starting in 1947. This was the AEC’s first production plant for high explosive components for nuclear weapons.