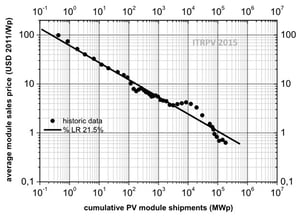 It's a common belief in some corners that photovoltaic (PV) systems are "incredibly expensive" and "have a payback of more than 25 years." While in many regions of the country, the cost of power produced by PV may still be more expensive on a kWh basis than the local electric utility, the numbers are changing fast.

The cost of modules is dropping logarithmically and is expected to continue to fall. Module prices are less than half of what they were just four years ago with the average worldwide PV module price in 2014 at $0.62/Wdc. Costs of inverters, racking systems, and installation have also fallen significantly as production has ramped up and competition has increased. As of July 2015, the U.S. average cost of distributed PV power systems greater than 100kW is about $2.60, installed1; utility-scale pricing (>1MW) is even less.  (This is the whole system, including all associated equipment and installation.) It wasn't so long ago when we would use $6 or $8/W as a rough screening number. Using these values today would grossly misrepresent the applicability of PV.

PLEASE check my numbers and references on this before applying any of these in your own analyses, but the trend is real and continuing. Worldwide installation capacity of solar PV is predicted to be 50GW in 2015, which is about the peak capacity of 25 nuclear power plants or 100 typical gas-fired peaking plants2. Despite the huge demand, manufacturers are expected to produce slightly more than 50GW of capacity this year meaning that prices should continue to fall.

The simple fact is that solar PV has emerged as a mainstream viable power source in many areas.* In  some areas, it's the only source. Small systems with battery back-up are bringing power to parts of the world that had very little hope of getting large-scale municipal-based electricity.

We should be considering any location paying more than $0.10/kWh as a potential candidate for PV. But I want us to expand our view a bit when we're speaking with clients so that they consider the energy security benefits that renewable systems can bring. Energy security is a core component in the increasingly important quest for resiliency. When renewable energy systems are integrated with other generating sources and storage devices, then an entire base, campus, or single building can be operated completely stand alone, or in parallel with the electrical grid. This is called a micro grid and a micro grid controller is required to achieve this integration. Fortunately, this technology is readily available and we have already implemented many such systems. (More to come on micro grids, but it's well worth noting that we have designed one of the largest micro grids on the east coast - the FDA Central Utility Plant in White Oak, Maryland.)

In regard to photovoltaic systems, substantial tax deductions and credits are currently associated with renewable energy. Typically, our federal clients can't take advantage of these incentives, but power purchase agreements (PPAs) and other options allow third parties to construct on-site renewable energy and sell the power back to the client for a guaranteed price. These deals can be quite complex, but when done right, they can be win-win scenarios, and we must consider these options when analyzing the attractiveness of renewable energy systems for our clients.

Finally, I want to briefly mention the numerous cautions I hear about the hurdles that distributed generation brings. (Distributed generation = generating capacity distributed in many locations rather than in a few large plants). There are absolutely technical challenges that must be addressed as we increase the percentage of renewables on our grid. We must account for the potentially rapid changes in output that can result from shading of PV arrays. Some sort of storage may be necessary to mitigate these changes and allow spinning reserves to take up the slack. Additional breakers and protection devices are also necessary with distributed generation, and all of the preceding challenges will cost money. These considerations are all correct and important, and absolutely refute the claim that solar PV is a simple "plug-and-play" means of large-scale power production. However, I would like to respond to the preceding points by noting that, compared to the engineering that has already gone into our grid, all of these challenges are completely surmountable and no more difficult than the issues faced in bringing on any new distribution sources. Let's apply our due diligence, but let's not shy away from the challenge of changing the way we get our power.

*This prompts the question of whether we should remove all such incentives for renewable technologies. There is no small amount of debate on this. But if you believe that emissions from fossil fuel-based power are contributing to climate change, then it's not a stretch to say that such power sources are not bearing the entire cost of their output as their effects must be ultimately addressed. Much more work is needed to ensure that all means of power production pay for the full upstream and downstream costs of their output, but current tax incentives have been a simple, proven way to stimulate the roll-out of clean energy.

2. I'm assuming an average nuclear plant capacity of 2,000MW and a gas-fired peaking plant capacity of 500MW. Of course, this isn't a straight comparison since both types of plants have a higher capacity factor than wind and solar, but peak summer days are when are grid really gets stretched thin, so it's worth comparing to new capacity of other types of plants. http://www.eia.gov/tools/faqs/faq.cfm?id=104&t=3

Mitigating the COVID-19 Spread: As We Plan for an Eventual Reopen, What Should be Considered? Read Post
Mason & Hanger: 200 Years of Innovation as an All-American Company Read Post